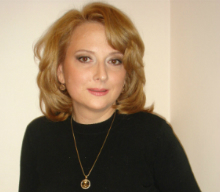 The great majority of believers are Lutheran, Catholicism and Orthodoxy are widely spread in the east.

Among the most popular national dishes, you can list caraway seed cheese, grey peas with lard, filled pastries with lard and special rye bread baked according to ancient recipes. Latvian rye bread is included in the daily diet of most of the Latvian population and is one of the most popular Latvian food 'souvenirs'.

In addition to the national cuisine, our restaurants offer fine cuisine of the world's best destinations that is able to satisfy both the connoisseurs of Slow food, or those who just love eating. Special gastronomic weeks are held in Riga on a regular basis, such as cooking projects "Spring Week of Riga Restaurants" and "Delightfully Delicious Voyage in Riga".

Do you know that

The highest point: Gaiziņš — 311.5 meters. The biggest lake: Lūbanas, 80.7 km2. The deepest lake: Dridzis, 65.1 m. The longest river: The longest river which begins outside Latvia, flows through its territory and flows into the Baltic Sea: Daugava (Western Dvina), the total length 1,005 km, in Latvia — 352 km

Population of Latvia is 2.3 million people: 59% Latvian, 29% Russian, 4% Byelorussian, there are also Ukrainian, Polish, Lithuanian, Jewish and representatives of other ethnic groups.

Latvia is bordered by Estonia in the north, Russia and Belarus — in the east, Lithuania — in the south and the Baltic Sea — in the west. The strategic location of Latvia determined its historical role as a cross-point of international trade, commerce and cultural contacts. The Vikings used the Amber Road along the River Daugava through Latvia reaching Byzantium and the Mediterranean Sea. 44% of Latvian territory is covered by forests; the country has an extensive network of free flowing rivers and thousands of lakes making Latvia a harbour where the wildlife is preserved better than in other European countries. Bird watching in Latvia, especially in coastal areas, can be gratifying experience.

Riga is proud of its architecture, especially the magnificent heritage of Art Nouveau architecture; therefore, use the opportunity to see it during your stay in Riga. 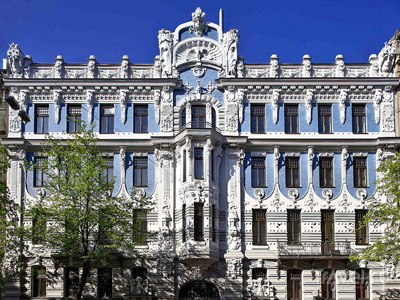 Art Nouveau (Jugendstil in Germany, Art Noveau in France, Modernismo in Spain, Sezessionsstil in Austria, Stile Liberty or Stile Floreale in Italy) appeared in Europe at the turn of the 19th and 20th centuries and its triumphal march continued until the First World War.  Riga is rightly considered to be the capital of Art Nouveau architecture. An extraordinary upsurge of Art Nouveau was observed at the time only in Riga — 40 percent of buildings in the centre of Riga are Art Nouveau buildings. There are about 800 Art Nouveau buildings in Riga, most of which are located in the city centre, especially in Alberta Street and in the so called Quiet Centre or the Embassy District.  Alberta Street was laid in honour of the 700th anniversary of the city (named after the founder of Riga  Albert von Buxthoeven) and was built in 2 years. Eight buildings were listed as the monuments of architecture. Most of the buildings in Alberta Street were designed by Mikhail Eisenstein himself .

The historic centre of Riga is included on UNESCO List of Intangible Cultural Heritage.

Each house in the Old Riga deserves your attention. When you walk around Riga, just lift your eyes up, and you will see a miracle!